Kaspersky : New study reveals the Internet is a source of family conflict and disconnect

The way we live our digital lives at home is having a big impact on our family relationships, according to new research from Kaspersky Lab and iconKids & Youth. With people spending ever more time online, a fifth of parents and children say that the Internet and connected devices can be a cause of family tension.

The research, which surveyed over 3,700 families in seven countries, provides an insight into how the digital world is disrupting traditional family dynamics. Whereas in the past parents were the first port of call for children seeking answers to questions or advice, one-in-four (23%) of the parents surveyed say that their kids now prefer to go online rather than talk to them.

The research also found that almost half (42%) of parents are not friends with their children on social networks, and one-in-five (18%) says this is because their children would find it embarrassing.

All in all, a fifth of parents (21%) and children (22%) say that the Internet can cause family tension. Most concerning of all, one-in-three parents (31%) believe the Internet isolates them from their children.

The conflict may be exacerbated by the fact that the devices used to go online are often shared. Two-thirds of the families surveyed said they share a family computer. As result, a third of parents (31%) complain that their child has broken something on a connected device or infected it with a virus while online (30%) and a quarter (24%) has had to pay for something their child had ordered or downloaded. Similarly, 13% of kids accuse parents of breaking a device and 16% complain that their parents had accidentally deleted some of their data. 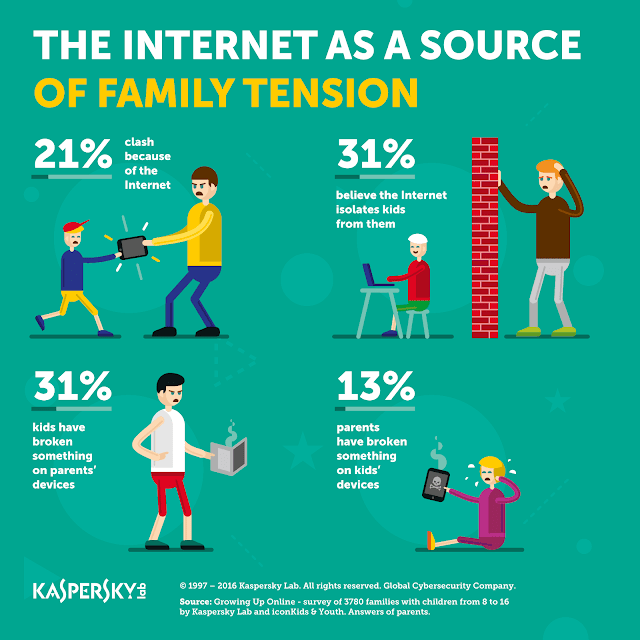