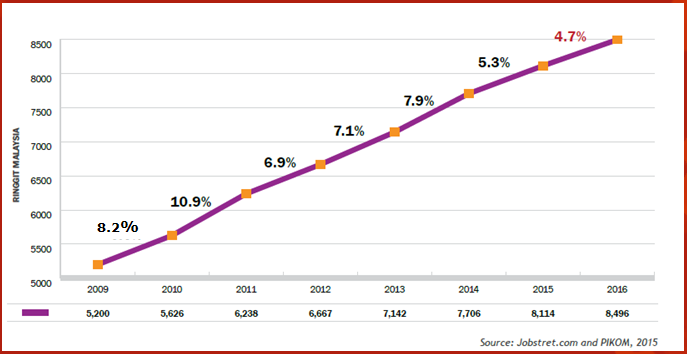 In 2015, an IT Project Manager in Malaysia earned more than their counterparts in the Philippines, Indonesia, Vietnam and India but much less than the ones in United States, United Arab Emirates and Hong Kong.
These are some of the many interesting findings in the National ICT Association of Malaysia (PIKOM)’s ICT JOB MARKET OUTLOOK IN MALAYSIA 2016 report.

The report was done in collaboration with Jobstreet.com, a leading online job board presently covering the employment markets in Malaysia, Singapore, Philippines, Indonesia and Vietnam. The report has been an indispensable guide to C-level executives, human resource practitioners, job seekers, undergraduates and many others, for more than eight years. It is aimed at helping decision makers in organisations, to understand and plan their talent requirements and budgets as well as to give job hunters a realistic view on the market rate for certain job categories, when they are asked for their salary expectations.
Launched today, the latest report indicated that despite the number of challenging factors that have hit our country since 2014 such as the slowdown of the economy, the drop in the prices of crude oil and commodities, the depreciation of the Ringgit against major currencies and the implementation of the Goods and Services Tax (GST), the ICT industry in Malaysia showed resilience and continued its growth path.
The total ICT value in Malaysia for 2015 is estimated to be RM155.2 billion, based on the Average Annual Growth Rate (AAGR) of 8% for the period 2010-2015. The share of the ICT industry to the economy expanded from 16.5% in 2010 to 17.6% in 2015.
The main driver of the ICT industry growth is the ICT Services subsector whose share to the GDP rose from 3.3% in 2000 to 6.6% in 2015 and is projected to reach 7 % by end of 2016.
“It has been a challenging 2015 for the industry. But we have achieved positive growth that has been particularly driven by and thanks to, the expansion in the ICT Services subsector, “said PIKOM Chairman Chin Chee Seong.
While ICT Manufacturing subsector has been slowing, the ICT Services subsector has been experiencing positive growth in the last two decades, he added.
“Consistent with industry growth, salaries also rose although at a slower growth rate,” said Chin, at a press conference today held at PIKOM’s premises in Damansara Perdana.
JOB MARKET TRENDS IN MALAYSIA 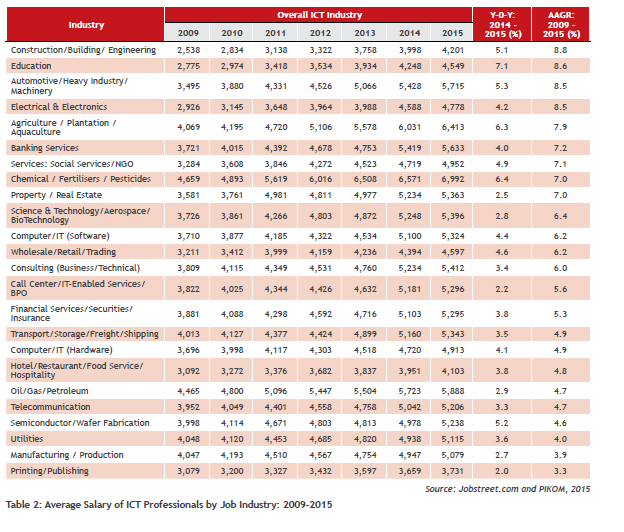 In the table above, the construction / building /engineering industries posted the highest AAGR of the average monthly salary of ICT professionals for the 2009 to 2015 period, at 8.8%, followed by education (8.6%); automotive/heavy industry/machinery (8.5%) and electrical and electronics (8.5%). Not surprisingly, the oil / gas / petroleum industry which has been experiencing a downturn, registered an AAGR of 4.7% over the same period and a 2.9% year-on-year growth in 2015.

However, oil/gas/petroleum was in the top five paying industries by job category. The other four are banking services; automotive/heavy industry/machinery; agriculture/plantation/aquaculture; and chemical/fertilisers/pesticides.
“The oil, gas and petroleum sector is still ranked as one of the overall top-paying industries by job categories despite the current industry downturn,” said PIKOM Research Committee Chair Woon Tai Hai.
“In fact in the fresh graduates, senior executives and middle manager job categories, the oil, gas and petroleum was in the top five paying industries in 2015 posting an average monthly salary of RM2,984, RM8,291 and RM11,804 respectively,” he added.
However, PIKOM acknowledged that the 5.3 % salary growth for 2015 for the overall average monthly salary of ICT professionals is the lowest in eight years, said Woon.
While the industry expected a downturn, it certainly did not expect an impact of such magnitude, he said.
“Perhaps it is also a wake-up call for the industry to realise that although salaries have been growing, future salary growth cannot be taken for granted,” he added.
The Challenge of Retaining Local Talent Remains
As in previous years, the industry continues to face the exodus of talent who seek greener pastures overseas due to better salaries and remunerations. When benchmarked against Asia, United States and Middle East, Malaysia continues to lag behind in terms of salaries, which has been a key factor in the continued prevalence of the brain drain issue.
The Purchasing Power Parity Adjusted Criterion benchmarking scale in 2015, which takes into account inflation rates and fluctuations in the foreign exchange, showed that the average monthly salary of an IT Project Manager at entry level in the United Arab Emirates and United States was respectively, 2.18 and 1.5 times more than in Malaysia. The average monthly salary of an entry level IT Project Manager, in Thailand, Hong Kong and Singapore, was 1.95 times, 1.88 times and 1.38 times, respectively, more than in Malaysia.
It is imperative that both the industry and government tackle the issue of talent outflow through ensuring continuous stream of quality fresh graduates entering the work force, promoting R&D and commercialisation and maintaining competitive salary packages, said PIKOM Chairman Chin.
“PIKOM would like to express their gratitude to Jobstreet.com for once again collaborating with us on this important report and also to Payscale for their valuable data. We would like to say a big THANK YOU to our sponsors, BDO, Fusionex, Hitachi Sunway and Powerware Systems for their support towards the success of this report,” he added.


“Finally, this report would not have been possible without the efforts of the PIKOM Research Committee headed by Mr. Woon Tai Hai,” said Chin.