The Ministry of Ministry of Domestic Trade, Co-operatives and Consumerism (MDTCC) today brought eight online marketplaces together with Microsoft to jointly combat the sale of counterfeit software sold online.

The anti-piracy stand was marked by a signing of a pledge with the MDTCC and Malaysia’s top online marketplaces – Lazada, 11Street, Lelong.my, Mudah.my, and LogOn – to remove the sales of counterfeit Windows software. A campaign poster will be hosted on all eight online portals to drive awareness against piracy.


In conjunction with the signing, consumers can check out #iamgenuine Online Consumer Campaign to determine and verify the authenticity of software and hardware, which is live until 21 December and will direct users to www.howtotell.com.

In line with Lazada Malaysia’s Online Revolution Campaign, Flash Malaysia is providing its consumers exclusive deals on Flash Plus 2 in conjunction with the Black Friday & Cyber Monday sales on Lazada. Customers can save up to RM124 when they purchase their Flash Plus 2 devices online from 25th-28th November 2016.

Among the unique features of Flash Plus 2 includes fast charging technology, fingerprint scanner and a booming HiFi together with a Helio P10 processor, a sizeable 5.5” screen and stock Android M operating system. With these unique built-ins, Flash Plus 2 enable consumers to experience premium features and built at a fraction of a price!

This is the season of giving indeed. Tech gifts have and always will be popular gift options during the festive season. While they bring much happiness and convenience, as it is with any connected device, there is always the very real risk of them serving as conduits for cyberattacks, as evidenced by webcams being part of the botnet that took down Twitter, Spotify and Netflix with DDoS attacks.

HDS has released its key business and technology trends for Asia Pacific in 2017. According to Hubert Yoshida, worldwide HDS CTO and Russell Skingsley, Asia Pacific CTO, digital transformation will continue to dominate enterprise IT strategies in 2017 and, according to an upcoming, HDS-sponsored Forbes Insights research survey, enterprises in APAC generally believe they are further ahead in their digital transformation journeys than their global counterparts.

Yoshida and Skingsley identified five trends for the technology market in 2017, including productivity gains driven by digital transformation that transforms business through people and process backed by agile infrastructure and cloud delivery models, accelerating transition to the cloud with hybrid cloud-first strategies, a continuation of bimodal IT, centralised big data and analytics, and integration of IT and OT (operational technologies) with analytics in the data centre.

Deployment of Brocade IP networking solutions at both the company’s network edge and its data center, dramatically simplifies operations at the Quanta Shanghai Manufacturing City (QSMC) plants and paves the way for the company to employ Software-Defined Networking (SDN) as it diversifies into producing a broader range of digital products.

Based on the operational benefits achieved at QSMC, Quanta has since deployed Brocade ICX switches as its next-generation network edge at additional QSMC plants. Quanta can now support end-to-end SDN. It has also recently deployed the Brocade SDN Controller and Brocade Flow Optimizer as a foundation for SDN application development, leveraging the OpenFlow support in true hybrid port mode, enabling a smooth transition to SDN without disrupting existing network operations.

Siemens, a global technology powerhouse, announced today the installation of the world’s fastest overland conveyor belt for PT Kaltim Prima Coal, one of the largest open-pit mining operators in the world.

PT Kaltim Prima Coal has partnered with Siemens to install Integrated Drive Systems (IDS) technology with Siemens automation technology to replace the older technology used on its existing conveyor belts and to overcome risks of high-speed operation. IDS technology is also installed on two new conveyor belts, one of which is the Melawan overland conveyor, a curved conveyor that runs at 7.5 metres per second, and the other, “OLC2”, a straight conveyor, that runs at a speed of 8.5 metres per second, making them both the fastest conveyor belts in the world. Both conveyors transport coal over a distance of 25 kilometres.

Stefanus Arif, Head of Digital Factory Division and Process Industries and Drives Division of PT Siemens Indonesia said: “With production industries under immense pressure to reach increasingly higher levels of productivity at the lowest possible cost, the ability to achieve high degrees of effectiveness has become more important in today’s mining industry. We are proud to see PT Kaltim Prima Coal reaping the benefits of our latest IDS technology, even going as far as achieving the world’s fastest overland conveyor belt speed, whilst reducing energy requirements.”

BIOSTAR is pleased to announce its latest addition to its gaming peripheral line-up with its first keyboard for gamers: the BIOSTAR GK3 mechanical gaming keyboard. BIOSTAR combines all the key elements that gamers need and designs their first mechanical keyboard dedicated for gamers and what they really need: a durable and responsive keyboard aimed at the masses. Today’s gamers are becoming more competitive and response times are a gamer’s number 1 tool in victory. If your gear can’t keep up then your gear is keeping you down. Keyboards are the primary input for PC games and when a single keypress counts, a mere milisecond of input is the difference in winning and losing. 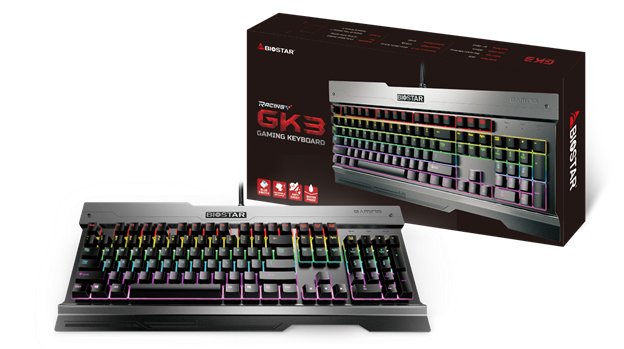 The BIOSTAR GK3 mechanical keyboard will have an MSRP of $44.99.