Ransomware is Kaspersky Lab’s Story of the Year 2016

In 2016 ransomware attacks on business increased three-fold: which represents a change from an attack every 2 minutes in January to one every 40 seconds by October. For individuals the rate of increase went from every 20 seconds to every 10 seconds. With more than 62 new families of ransomware introduced during the year, the threat grew so aggressively that Kaspersky Lab has named ransomware its key topic for 2016.

The Story of the Year paper forms part of Kaspersky Lab’s annual Kaspersky Security Bulletin that looks back over the year’s major threats and data and predicts what to expect in 2017.

Among other things, 2016 revealed the extent to which the Ransomware-as-a-Service business model now appeals to criminals who lack the skills, resources or inclination to develop their own. Under the arrangement, code creators offer their malicious product ‘on demand’, selling uniquely modified versions to customers who then distribute it through spam and websites, paying a commission to the creator – the main financial beneficiary.

“The classic ‘affiliate’ business model appears to be working as effectively for ransomware as it does for other types of malware. Victims often pay up so money keeps flowing through the system. Inevitably this has led to us seeing new cryptors appear almost daily,” said Fedor Sinitsyn, Senior Malware Analyst, Kaspersky Lab.

The Evolution of Ransomware in 2016

In 2016, ransomware continued its rampage across the world, becoming more sophisticated and diverse and tightening its hold on data and devices, individuals and businesses. 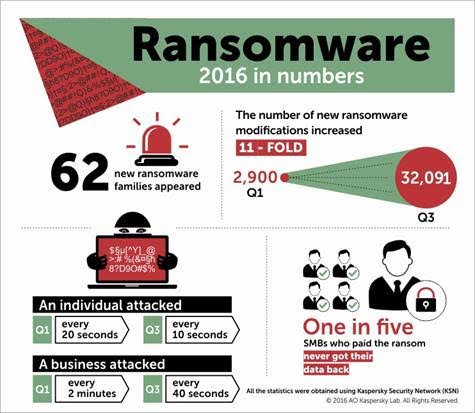 Fortunately, 2016 also saw the world begin to unite to fight back. The No More Ransom project, launched in July, brings together law enforcement and security vendors to track down and disrupt the big ransomware families, helping individuals to get their data back and undermining the criminals’ lucrative business model.

The latest versions of Kaspersky Lab products for smaller companies have been enhanced with anti-cryptomalware functionality. In addition, a new, free anti-ransomware tool has been made available for all businesses to download and use, regardless of the security solution they use.
Kaspersky Security