BIOSTAR is highly pleased to announce the successul showcase of BIOSTAR’s X299 motherboard, the whole new RACING series, and crypto mining series motheroards at COMPUTEX 2017 along with their entire product lineup for consumers and industries. Gamers, businesses and enthusiasts were treated to a wide array of products that offer excellent value while delivering great performance. Attendees were presented the powerful and versatile platform line-up that BIOSTAR has to offer for those looking for motherboards dedicated for mining but is fully capable of handling daily tasks for general use. 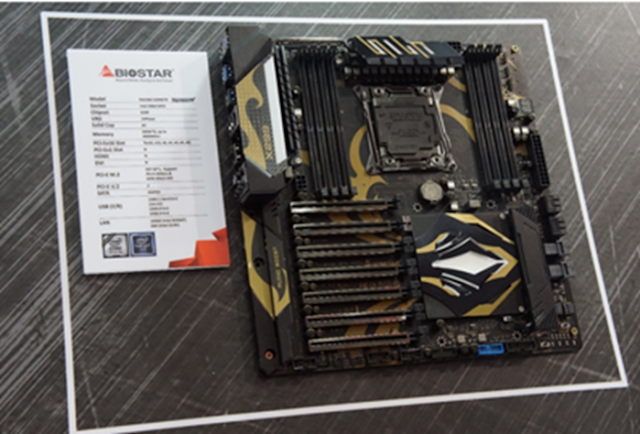 Highlighting the showcase was BIOSTAR’s flagship enthusiast gaming line with both 2nd-gen RACING Series motherboards on display including the upcoming flagship RACING X299GT9 motherboard for the high-end Skylake-X and Kaby Lake-X processors from Intel.The motherboard supports up to 8 DIMM modules of DDR4 memory in quad-channel or dual-channel. It also allows for up to seven PCI-E devices. Also on show were the existing motherboards for gamers featuring full-color RGB LED lightings. New products for the RACING series peripheral lineup are also on display and received very good feedback from attendees for their unique design ideas that make them highly favorable for gamers. It features all the best of the 2nd-generation RACING Series like M.2 Cooling Protection, VIVID LED DJ RGB lighting control utility. 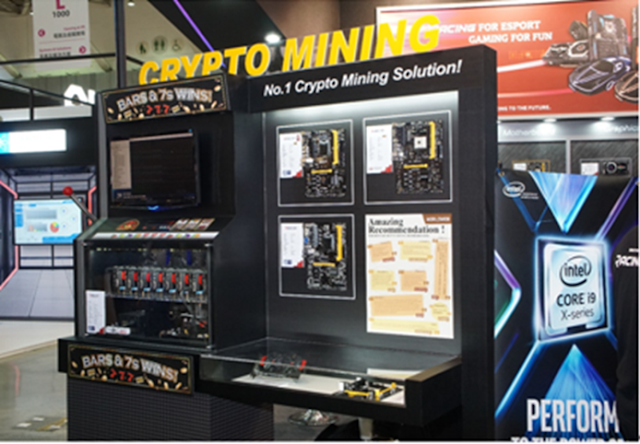 Crypto mining has received a revitalized surge in both value and interest that in turn has drove the attention of enthusiasts towards the mining trend. A crypto mining rig with 8 AMD GPUs by BIOSTAR crypto mining card and shows the ability of the motherboard to support up to 8 graphics cards. BIOSTAR has been a strong partner of crypto currency mining adopters, leveraging performance and stability for a more profitable and reliable platform in this thriving industry. BIOSTAR’s crypto mining series motherboards include the TB85, TB250-BTC, TB350-BTC, and the TA320-BTC all of which are highly specialized and are designed for the rigorous standard’s of cryptocurrency mining like Bitcoin, Ethereum and Zcash.

BIOSTAR puts special focus in the crypto mining industry as it intends to deliver a cost-effective solution for those looking to get started as well as those who want to grow their mining operation and profit off the crypto currency. BIOSTAR’s TB85 and TB250-BTC offer Intel platform solutions while BIOSTAR’s 3-A concept powers the AMD platfrom crypto mining motherboards TB350-BTC and TA320-BTC. BIOSTAR crypto mining series motherboards are designed with maximum profitability in mind with up to six PCI-E slots delivering maximum platform utilization. Two external AUX power connectors guarantee stable operation for the graphics cards to also enhance performance.

Rounding out the components side for BIOSTAR were their whole new RX500 series graphics cards for gaming and their RX470 graphics card that are the option for mining on display in their booth featuring reference cooling and custom dual fan coolers. BIOSTAR graphics cards feature aggressive design with weapons to give them the distinct gamer feel that make them highly exciting products. BIOSTAR has all new gaming series including marvelous the gaming keyboard RACING GK3 and the gaming mouse RACING GM5. BIOSTAR is going to put more efforts on the gaming market so they will launch more fantastic gaming peripherals. 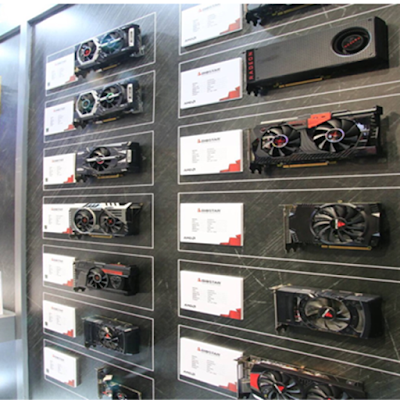 A special rig was on display featuring the BIOSTAR RACING X370GTN mini-ITX motherboard in a special modded case complete with custom liquid cooling to highlight both the lighting features as well as the compact size the motherboard. 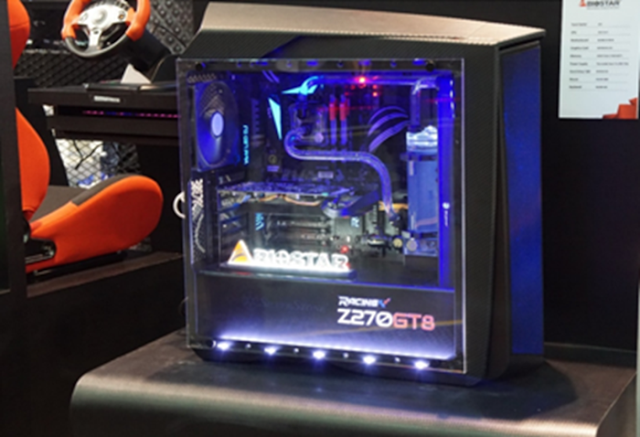 There will be numerous activities to be held in the BIOSTAR booth. Take a picture with the BIOSTAR products and post them on Facebook to join our lucky draw.

BIOSTAR has many more to show everyone. The BIOSTAR booth is located at the Taipei Nangang Exhibition Center, Hall 1, 4F Booth L0828 from May 30th – June 3rd 2017.