In the first half of the year, despite a solid economy with low inflation, low unemployment, and plenty of highly-anticipated innovations underway, the Technology, Media & Telecommunications (TMT) sector recorded 1,482 M&A transactions globally worth a total of US$ 175.9bn – a 20.9% value drop with 84 fewer deals compared to H1 2016 (US$ 222.3bn, 1,566 deals), leading TMT to rank as the fourth sector globally by value.

While by no means the largest deal, H1 2017 was noteworthy for at least one transformative deal stemming partially from the Tech industry: Amazon’s US$ 13.5bn bid for Whole Foods. Though technically falling under the Consumer sector, the deal caused a stir in both the Food and Retail industries due to implications that the Tech giant might leverage its status as an e-commerce behemoth to remake the Consumer sector as a whole. 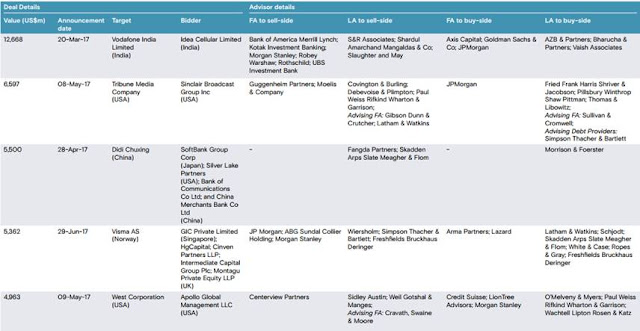 H1 2017’s top transaction – and third-largest TMT deal overall – was the US$ 5.5bn bid for an undisclosed stake in China’s ridesharing giant Didi Chuxing by a consortium of investors led by Japan’s Softbank Group – which itself accounted for US$ 5bn of the total investment. Didi Chuxing had itself been part of another consortium earlier this year, also including Softbank, which had invested in Brazil’s own ridesharing start-up, 99Taxis, for a total of US$ 200m. Last year, Didi Chuxing gained a significant advantage in the ridehailing industry when Uber sold its Chinese operations to the company for US$ 7bn.