Razer™, the leading global lifestyle brand for gamers, today announced the official launch of zGold-MOLPoints in Malaysia. To celebrate the launch, Razer and MOL are hosting zGold-MOLPoints AFK @ Malaysia, a two-day gamer focused event that gives fans the chance to experience the full range of award-winning hardware, software and services that make up the Razer ecosystem.

LG Electronics (LG) announced the unveiling of a video wall signage in Dubai that has the distinction of being the largest OLED screen and the largest high definition video wall in the world. Located in Dubai Mall adjacent to the Burj Khalifa, the mega-sized video wall was created using 820 LG Open Frame OLED signage panels. LG partnered with Emaar Entertainment, operator of the Dubai Aquarium, on the record-breaking project.


OLED is often referred to as the next-generation display because it is emissive technology, meaning that the display emits its own light, eliminating the need for bulky and inefficient backlighting. This results in superb images with the deepest possible blacks and life-like colors as well as wider viewing angles than conventional backlit displays.

The use of LG’s Open Frame OLED signage at the Dubai Aquarium is particularly fit-ting because the curved form factor of the display follows the undulations of flowing water. LG Open Frame OLED signage can be configured into both convex or concave curves in both landscape and portrait modes, blending into any public and private space.

Today, Lenovo is excited to unveil their Official Store on Lazada! With Malaysians shopping online more and more these days, it’s no wonder that Lenovo is partnering with the Southeast Asian online shopping giant, Lazada.

Lenovo will be offering a Lenovo IdeaPad 120S that is exclusively available through their Official Online Store on Lazada from today onwards. In conjunction to this partnership, Lenovo is also featuring a RM 100 discount for the first 100 purchases of their IdeaPad 320! The link to Lenovo’s Official Store is - http://bit.ly/2uHLoh7.

PR - Aug 17, 2017 - How Attackers hide Backdoor in Software used by Hundreds of Large Companies around the World

Kaspersky Lab experts have discovered a backdoor planted in a server management software product used by hundreds of large businesses around the world. When activated, the backdoor allows attackers to download further malicious modules or steal data. Kaspersky Lab has alerted NetSarang, the vendor of the affected software, and it has promptly removed the malicious code and released an update for customers.

ShadowPad is one of the largest known supply-chain attacks. Had it not been detected and patched so quickly, it could potentially have targeted hundreds of organizations worldwide. 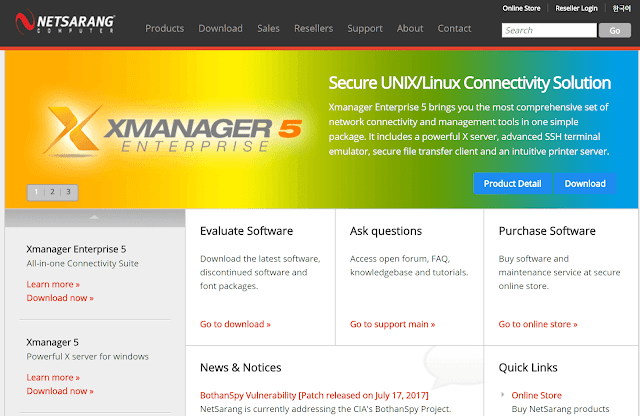 Following the discovery, Kaspersky Lab researchers immediately contacted NetSarang. The company reacted fast and released an updated version of the software without the malicious code.

Oracle announced that Oracle Exadata Cloud is now available on Oracle’s next-generation cloud infrastructure. The marriage of Oracle Exadata, the highest performing on-premises and public cloud database platform, with Oracle Cloud’s unique bare metal compute and storage services, delivers a combination of performance and availability for the entire application stack that only Oracle can deliver.

With the increased levels of speed and availability now possible, high-demand applications such as those utilizing real-time targeting, analytics, or personalization now run in the cloud with extreme performance. Only Oracle Cloud Infrastructure offers: self-provisioning of multiple bare metal servers in less than five minutes with each supporting over 4 million IOPS, block storage that linearly scales by 60 IOPS per GB, and now Oracle Exadata Cloud on the same low latency Virtual Cloud Networks. This combination of features enables applications to run at unparalleled speed. In addition, only Oracle Cloud Infrastructure offers complete compatibility with Oracle Databases deployed on-premises, helping ensure a smooth transition to the cloud, and an efficient hybrid cloud strategy. Oracle Exadata Cloud has expanded its geographical footprint into the US West (Phoenix, Ariz.) region, further enabling organizations worldwide to experience all the benefits of this high-performance system in the cloud, without the burden of managing and maintaining it internally. PR - Aug 15, 2017 - Retarus continues on the road to success

Retarus, a global provider of corporate messaging solutions, has reported a record boost and positive gains in its financial figures for the fiscal year 2017. This highlights the success of the Retarus' team and the trust their customers have shown in them, especially in Asia Pacific which has seen a boost of 69.2% due to the acquisition of several flagship customers.

Retarus’ strong performance was mainly driven by the following factors:

Traveloka, a leading travel booking app for domestic and international destinations in Southeast Asia, has announced its participation in the upcoming 29th SEA Games and 9th ASEAN Para Games as a Gold Sponsor.

In support of its role as an official online travel partner, Traveloka is offering exclusive deals with savings up to 30 percent for selected flights, and up to 40 percent for hotel stays with its hotel partners in Malaysia.

Commenting on the sponsorship, Youth and Sports Minister Khairy Jamaluddin said, "Traveloka as a brand embodies the spirit of KL2017, through perseverance and hard work, it has risen to become a significant player in Southeast Asia."

Traveloka Country Manager for Malaysia and Singapore, Halif Hamzah, added that the company was proud to play a part in such a momentous event.

“Traveloka is delighted to welcome ASEAN to Malaysia with this special promotion. There’s a lot to discover and experience in Malaysia!,” he said. To snap up these deals, book on Traveloka from now until 31 August 2017. For more information, visit https://traveloka.com/en-my/promotion/hello-malaysia.
Consumer IT Database Gaming Hospitality Messaging Security Video Weekly Updates