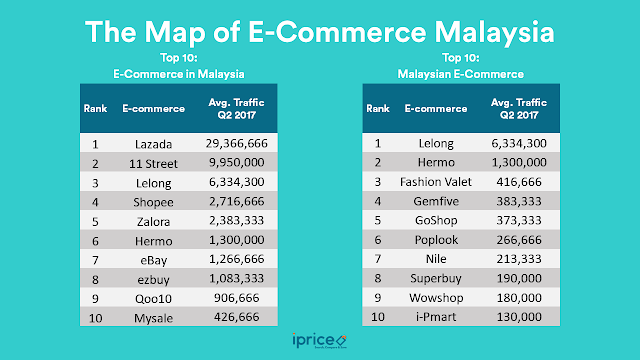 To find out who holds the ‘throne’ in Malaysia’s e-commerce landscape, we utilised publicly data provided by SimilarWeb, LinkedIn and Social Media pages such as Facebook, Instagram and Twitter to find their online traffic, number of staff and followers on social media. Based on this, we created an interactive infographic to rank and easily view who is most popular amongst Malaysians.

So, who are the winners in Malaysia’s e-commerce landscape?

We ranked and averaged each e-commerce’s rankings and found that Lazada remains the clear winner, followed by Zalora and 11 Street. This is reflective of Lazada’s announcement earlier this year, as they said Lazada in Malaysia is growing more rapidly as compared to other countries where they operate. Their market leading status can be easily seen through their traffic as they received an average 29 million visitors on a monthly basis while 11 Street, ranking 2nd place in overall average traffic only received 9 million visitors, almost 3 times smaller. 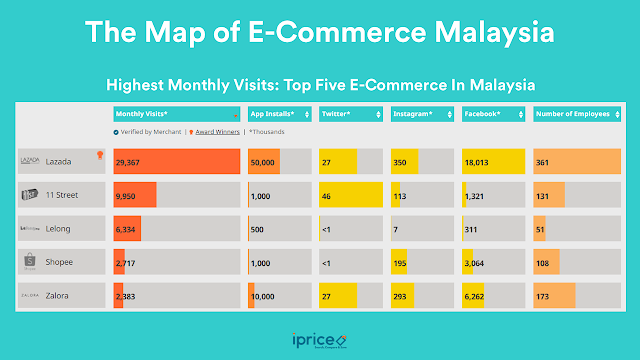 Not to mention with Amazon entering into Southeast Asia through Singapore, the Alibaba-backed e-commerce has publicly expressed confidence when facing competitors as they have obtained valuable on-the-ground knowledge of the six markets where they operate and plans to further bolster their services to stay on top of their game.

We also saw that the top three e-commerce were all founded in the Southeast Asia region. While e-commerce originating outside the Southeast Asian region such as eBay and Sephora is available to Malaysians as well, regional or local based e-commerce seemed to be more successful probably due to their on-the-ground knowledge which gave them a higher advantage. Nevertheless, Malaysia remains an attractive location for international players as well as Malaysia’s Prime Minister Datuk Seri Najib Tun Razak announced its partnership with Jack Ma to establish an electronic trade forum to fast-track the growth of e-commerce for both local and foreign players.

A household name to many, Lelong is the undisputed local ‘king’ of e-commerce with online traffic almost five times more than Hermo in 2nd place. Probably the oldest Malaysian based e-commerce (est. since 1998), Lelong remains the most popular C2C platform to Malaysians as they were among the first to spot the e-commerce potential. 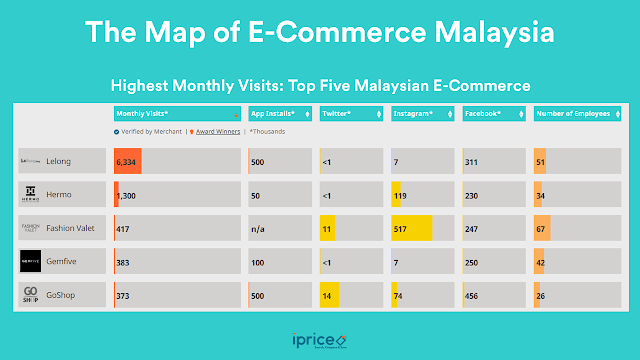 Another apparent trend in the top 10 list was that cosmetics and fashion websites such as Hermo and Fashion Valet are hugely popular as well. These local brands thrive mainly through social media pages such as Instagram where they can easily feature products via images and partnerships with popular local celebrities and brands.

While e-commerce specialising in tech & gadget products are popular in countries such as Thailand and Indonesia, i-Pmart was the only similar merchant featured our top 50 list. Reason for this was because many tech & gadget merchants initiated their business through physical shops and provided tech services.

Unfortunately, our list only included businesses who initiated their business on the online space to so we can provide an accurate apples to apples comparison.

If you’re an active Instagrammer, you’re most probably following one the following brands as well. Currently Bella Ammara ranks number one, followed by Naelofar Hijab, and Fashion Valet. Meanwhile, non-local fashion-centric brand Lazada, is only in sixth place with followers more than two times smaller than Bella Ammara. Interestingly, we could see that Bella Ammara was able to amass a larger fan base though they had 10 times lesser Instagram posts as compared to Fashion Valet. 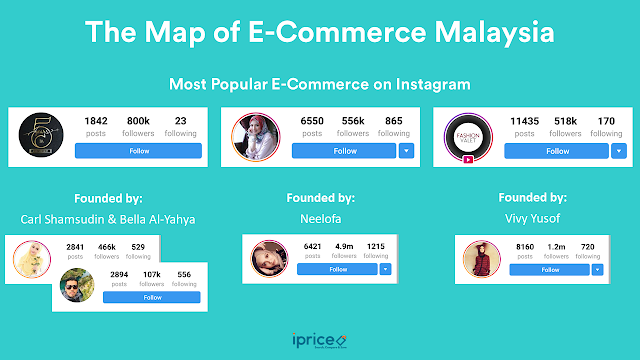 However, this pales in comparison when put next to the number of Instagram followers of the e-commerce owners. Currently, Bella Ammara, owned by Carl Samsudin & Belle Al-Yahya, has more than 574k followers altogether, while Naelofar Hijab, owned by Neelofa has more than 4.9m followers and Fashion Valet, owned by Vivy Yusof who has more than 1.2m followers. As such, it is not a surprise that their local brands would be popular amongst Instagrammers as the owners are hugely popular local social media influencers.

Interestingly, not all fashion e-commerce received the same number of traffic on their website. However, these local brands remained successful as their products are mostly sold through physical outlets (owned by them and clothing outlets) and general e-commerce outlets such as Lazada, Zalora and others.

Scalability Proving to Be the Most Effective Tool for Businesses

Fashion brands in Malaysia has seen much benefit running their operations through an e-commerce model as it enables them to scale their business according to consumers’ needs in the most efficient manner possible.

One such example can be seen through Shopee. Initiated by Garena mid-2015, the e-commerce is the youngest e-commerce in the list but swiftly rose in popularity and is now ranked 4th place in the overall highest average traffic for Q2 in 2017.

From a local perspective, we can see Lelong ranking 3rd highest in traffic but only has 51 staff (according to LinkedIn) indicating a highly efficient C2C e-commerce model which enables them to maintain the platform with low number of staff while maintaining more than 6 million monthly visitors.
e-Commerce