Dell : Research Reveals a Divided Vision of the Future

We’re entering the next era of human-machine partnerships with a divided vision of the future, according to global research now available from Dell Technologies. 58% of the 3,800 global business leaders surveyed from Asia Pacific & Japan (APJ) forecast that automated systems will free up their time, while the other 42% believe otherwise. Similarly, 48% believe they’ll have more job satisfaction in the future by offloading tasks to machines, while 52% disagree. More APJ leaders predict this impact on their work and business, compared to their global counterparts, yet the research suggests APJ businesses are less prepared and more concerned about how to compete. 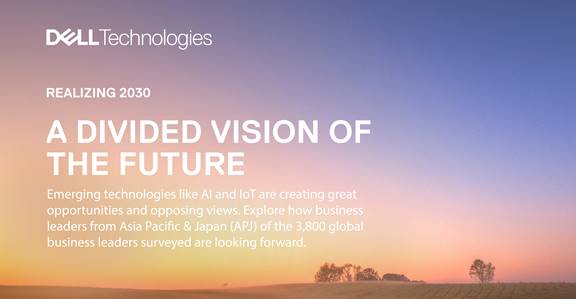 The quantitative research conducted by Vanson Bourne follows Dell Technologies’ seminal story, “Realizing 2030: The Next Era of Human-Machine Partnerships.” That study forecasted that by 2030, emerging technologies will forge human partnerships with machines that are richer and more immersive than ever before, helping us surpass our limitations. Business leaders in the region agree: 80% of respondents expect humans and machines will work as integrated teams within their organisation inside of five years.

But leaders are also split by whether the future represents an opportunity or a threat, and torn by the need to mitigate these risks.

52% say the more we depend upon technology, the more we’ll have to lose in the event of a cyber-attack; 48% aren’t concerned 53% of business leaders are calling for clear protocols in the event that autonomous machines fail; almost half abstained 49% say computers will need to decipher between good and bad commands; 51% don’t see a need

“You can understand why the business community is so polarised,” comments Jeremy Burton, chief marketing officer, Dell Technologies. “There tends to be two extreme perspectives about the future: the anxiety-driven issue of human obsolescence or the optimistic view that technology will solve our greatest social problems. These differing viewpoints could make it difficult for organisations to prepare for a future that’s in flux and would certainly hamper leaders’ efforts to push through necessary change.”

David Webster, President, APJ Enterprise, Dell EMC commented: “Realising the future opportunity that human-machine partnerships will bring is as much about people as it is about technology. Whilst many organisations across APJ are transforming their IT in order to enable future innovation and the best possible customer experience, business leaders will need to address cultural barriers too. Organisations will have to build the right culture to collaborate, embrace change, and align on how best to prepare and succeed.”

Amit Midha, President, APJ Commercial, Dell EMC added: “APJ is the epicenter for innovation in AI and IoT and, as a result, there is significant expectation riding on the positive impact emerging technology can bring – particularly to the region’s cities. Despite the lack of readiness as perceived by leaders in the region, technology and innovation leadership will be integral to overcoming the transformation challenges ahead, with human-machine partnerships set to revolutionise how we live, work and play in urban areas.”

Given the promise of monumental change—fuelled by exponentially increasing data and the applications, processing power and connectivity to harness it—61% speculate that schools will need to teach how to learn rather than what to learn to prepare students for jobs that don’t yet exist. This thinking corroborates IFTF’s forecast that 85% of jobs that will exist in 2030 haven’t been invented yet.

Furthermore, many businesses aren’t moving fast enough, and going deep enough, to overcome common barriers to operating as a successful digital business. Only 24% of businesses believe they are leading the way, ingraining digital in all they do. 44% percent don’t know whether they’ll be able to compete over the next decade, and the majority (63%) of businesses are struggling to keep-up with the pace of change.

Main barriers to becoming a successful digital business in 2030 and beyond in APJ:
Unified by the need to transform

Leaders may be divided in their view of the future and facing barriers to change, but they’re united in the need to transform. In fact, the vast majority of businesses believe they’ll be well on their way to transforming within five years, despite the challenges they face.

Likely to achieve within five years:

Burton adds, “We’re entering an era of monumental change. Although business leaders harbor contrasting views of the future, they share common ground on the need to transform. Based on the many conversations I have with customers, I believe we’re reaching a pivotal moment in time. Businesses can either grasp the mantle, transform their IT, workforce and security and play a defining role in the future or be left behind.”
A.I Survey trends