BAD LAB, a dynamic brand that offers a complete personal care range Man-gineered for the unconventional man, is making an inaugural entrance into the world of esports.


With the endorsement of Esports Malaysia (ESM), the governing body for electronic sports in Malaysia, BAD LAB plans to engage in activities that create awareness and bring to the masses, the exciting and challenging world of esports.

BAD LAB will sponsor the Malaysian CounterStrike:Global Offensive (CS:GO) premier team. In line with staying true to its culture and values of brave and daring, BAD LAB will be the FIRST brand within its category to sponsor an esports professional team and bringing awareness of the sports across various media platforms in line with the growing popularity of esports.

Bosch, a leading global supplier of technology and services, has ended its 2018 fiscal year in Southeast Asia with consolidated sales of RM3.99 billion, registering an increase close to 5% from the previous year. Bosch continues to break new technological grounds with local innovations and aims to reduce carbon footprint to zero by 2020 at its 400 locations across the globe.

Industry 4.0 is vital to companies to embrace the digital transformation journey. Bosch has built up decades of manufacturing experience and is capable to show the benefits of IR 4.0 solutions in its own plants throughout the region that is faster, more efficient and flexible plant controls that enable businesses to maximise output.

Today at COMPUTEX 2019, Intel made a sweeping set of product and technology announcements, spanning the hottest segments of the PC industry. From new 10th Gen Intel® Core™ processors and new details on Intel’s innovation program, codenamed “Project Athena” that will take mobile computing to an entirely new level, to the first-ever gaming processor with an all-core turbo of 5GHz, Intel again raised the bar for PC experiences.

Based on years of research to understand people’s needs, challenges and expectations of the laptop, Project Athena program prioritizes enabling experiences that are reflective of real-world conditions as measured by “key experience indicators” (KEI).

As we step into the fourth week of Ramadan, ShopBack takes a look at the online food delivery and table booking trend and found that
Foodpanda shares that Malaysians tend to place their orders as early as 4pm, which is different than the non-fasting months (dinner orders usually start from 8pm onwards). The most popular food ordered during Ramadan so far are fried chicken, chicken burgers and wedges, among the others.

Air treatment products flew off the shelves in the first three months of 2019 across Thailand, Malaysia, Singapore and Indonesia. Consumers in each market turned to air treatment products to improve the air quality in their homes as they experienced heat wave, haze and air pollution during those months.

According to GfK’s Point of Sales tracking, the air treatment market in three of the four markets surged significantly within the range of 34 and 134 percent, led by Thailand which contributed to almost three-quarters of the overall value. 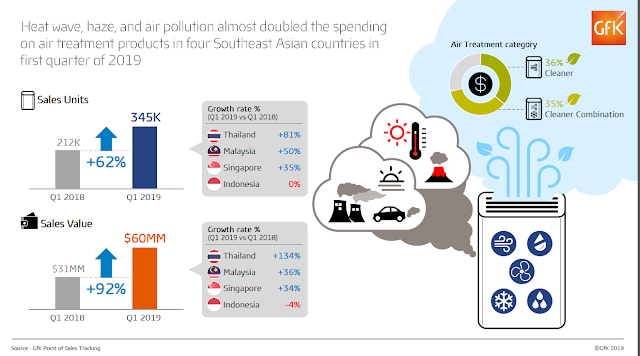 A heat wave that hit the shores of Malaysia early this year also contributed to the surge as Malaysian consumers spent over USD 7 million on air treatment products. Air coolers, which form the dominant segment in this market accounted for nearly half of the total air treatment sales in the first three months as consumers snapped up cooling appliances to counter the intense temperature which soared to 36 degrees in some Malaysian states.

Overall, GfK also observed a growth of 62 percent in sales volume of air treatment products in Southeast Asia in Q1 2019 compared to Q1 2018.