on July 26, 2019
To reward consumers, HUAWEI is bringing prizes total worth up to RM1 million via its yearly event — The HUAWEI Carnival.

Eligible Malaysians who purchase selected HUAWEI devices from HUAWEI Carnival participating outlets nationwide (including HUAWEI Experience Stores or the Official Online Store) will stand a chance to win amazing prizes such as a brand new Mercedes GLA200 Night Edition, 100 units of E-bike Orbit and 400 units of Electric Scooters Starlight. There are also other attractive rewards and gifts up for grabs!

HUAWEI Carnival 2019 consists of two different activities to appeal to its customers, which are the “Spin and Redeem” activation and the lucky draw contest. Both activities require three simple steps to participate:


Winners for the lucky draw contest will be announced on 30 August 2019 via the HUAWEI official Facebook page.

That is not all! The HUAWEI Y9 Prime 2019 will also be on sale starting from the 27 July 2019! HUAWEI’s first ever smartphone with a 16MP Auto Pop-Up selfie camera and a Triple rear camera with ultra wide angle lens will be available nationwide at the price of just RM899! A great deal for not just a best-in-class camera setup, but also a BIG screen, a BIG battery and a BIG storage capacity smartphone.

Meanwhile, Huawei users are able to redeem exclusive rewards from various brands partners such as a FREE 6-month Viu Premium Subscription via the Member Center, which can be downloaded via App Gallery. Worth up to RM299 per customer, this is the first time HUAWEI is introducing a consumer-rewarding program for the Y series. The redemptions of the rewards are based on first come first serve basis, while stock lasts. 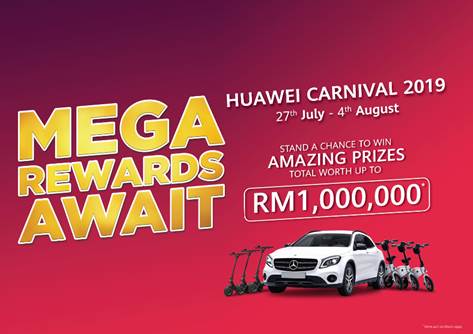