on August 17, 2014
News for Week 2 of Aug 2014, the biggest news was the announcement that WD Expanded NAS Storage Offerings with 6 TB, 5-Platter Hard Drive.

WFT Cloud EducationⓇ, a leading IT Training firm in India, today announced the launch of several cloud workshops and seminars in major institutions across India to promote cloud awareness and, to stress on the need for cloud education. Several Engineering & Science colleges in India pursue a rigid and rather age-old curriculum, which often keeps graduates less informed about the current technology trends. With an initiative to better educate college students about current market expectations, WFT Cloud EducationⓇ hosted several cloud workshops within colleges here in India.

An interview held with the management team within WFT Education revealed several important insights, which were focused towards the need for a vendor agnostic, time-proof and tailor made curriculum for students currently studying in colleges. The team also expressed its concern about the unemployed engineering graduates which has raised to more that 100,000 in the academic year 2013 – 2014. The reason for such a huge deficit in the number of employers is not the employers themselves; instead it is because of the lack of skills, which graduates fail to possess when they seek employment.

Melbourne will be the home to the largest games festival in the world. The Penny Arcade Expo (PAX) will be returning to Australia this year to celebrate all things tech with console gaming, computer games and table top games.

In 2013, Melbourne became the first city outside of North America to hold a PAX festival. The event was sold out in days and was so successful, PAX Australia, returns to Melbourne once again from 31 October – 2 November 2014 at the Melbourne Convention and Exhibition Centre (MCEC).

Three day international passes are only available for those outside of Australia and can be purchased for RM 450 (AUD 150). There are also exclusive accommodation discounts available for those travelling to the show. Night time events and special activities all throughout the city of Melbourne will showcase the creative, quirky and inventive city that has become home to the only games festival of its kind in the Southern Hemisphere.

The Global Think Test is made up of a series of online brain games, quizzes and puzzles, specially created to let participants hone their combination, calculation skills and thinking abilities.

“Being alert and focused can help you win computer games, but can also help you keep cybercriminals at bay. We can avoid so many threats by simply being alert,” says Eugene Kaspersky, Chairman and CEO Kaspersky Lab. “If something is too good to be true, it most probably is. And in most cases there are tell-tale signs that a website is fake. If you’re not distracted by other things and are trained to stay focused, you should be able to spot them.”

As the online world is increasingly populated with threats, common sense plays an extremely important role. Users need to be able to identify a potentially dangerous situation quickly – and often that means acting contrary to our normal instincts. As social beings, we are led by basic principles such as trust, authority, helpfulness, curiosity and reciprocation, all of which can be abused by cybercriminals. Therefore, we need to train our brains to make the right decisions fast, and Kaspersky Lab has designed the Global Think Test to see if users have what it takes.

Australia-based high-end hosted services provider RackCorp has started transitioning its data center operations to a new network foundation based on advanced Ethernet fabric infrastructure from Brocade. The company, which operates from 21 data centers across nine countries, has embraced the Software-Defined Networking (SDN) capable family of Brocade® VDX® switches and VCS® Fabric technology to meet the high-availability and increasingly high-bandwidth requirements of its global client base.

With the help of Brocade architecture planning, initial fabric deployments have been made at RackCorp data centers in Sydney, Melbourne, and Perth, Australia as well as Hong Kong to support dedicated server, virtual server, and cloud computing services.

PBS Software GmbH announced that for the first time they have been positioned the furthest for completeness of vision and ability to execute in the Niche Players Quadrant in Gartner's "Magic Quadrant for Structured Data Archiving and Application Retirement". The Magic Quadrant is Gartner's central report for assessing manufacturers. It is compiled independently by Gartner based on a comprehensive catalog of criteria, is held in high esteem, and is therefore often used as a selection criterion in sales situations.

According to Gartner "By 2017, structured data archiving will represent one-fifth of the information governance efforts in enterprises" Increasingly, IT leaders are retiring applications as they respond to demands to move to the cloud, consolidate data centers and improve agility. Structured data archiving, from vendors such as PBS, address the management of aging data, application consolidation and retirement.

The global optical components (OC) market posted revenues of US$6.8bn in 2013, up 3% from the 2012 level. The gain was due to strong datacom sales driven by hyperscale data centers, 100G coherent demand, and unexpected growth in sales of transceivers for fiber-to-the-antenna applications for 4G build-outs, according to global market research firm Ovum.


OC sales will grow in 2014 following a respectable 1Q14. The market posted a 1% decline sequentially but grew 7% compared to the year-ago period. The lower 1Q14 result is due to new lower telecom prices being implemented. Demand for 100G components for coherent transmission in WAN, datacom transceivers at 10 and 40G, and fiber-to-the-antenna transceivers is expected to continue. Traffic continues to increase, and high-speed optics being used in new applications are helping to drive the market forward.

Francis Han, general manager for business analytics of Oracle ASEAN highlighted that today’s marketers in ASEAN are facing tremendous pressures within organization to be data-driven in their decision making.

Building on its commitment to help marketing teams to execute marketing activities that have a measurable impact on revenue, Oracle is extending the industry’s most comprehensive Marketing Cloud to offer marketers an unparalleled ability to deliver an enhanced customer experience.

Huawei, a leading global information and communications technology (ICT) solutions provider today signed a Memorandum of Understanding (MoU) with Telekom Research & Development Sdn Bhd (TM R&D), a wholly owned subsidiary of Telekom Malaysia Berhad (TM), at TM Convention Center. The MoU aims to launch joint innovation efforts to co-develop next generation access technologies for both fixed-line and wireless connectivity in Malaysia. Through this collaboration, both parties will share research facilities and encourage knowledge transferring, as well as establish a joint lab within the TM Innovation Center, in Cyberjaya within the Multimedia Super Corridor (MSC) of Malaysia. 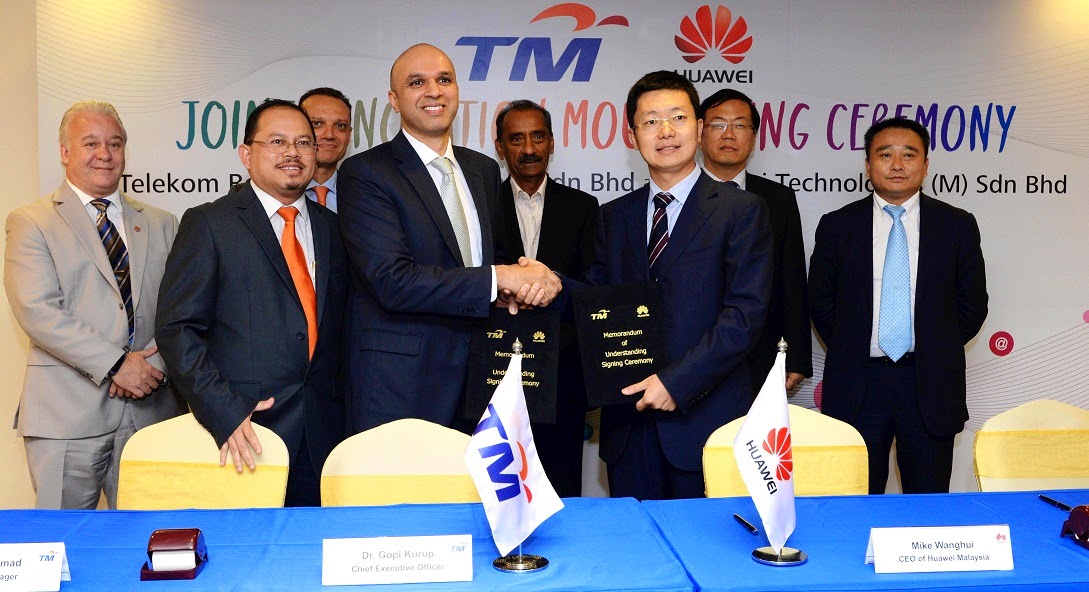 I Synergy Universal Sdn Bhd, the company that developed and manages Affiliate Junction (AJ), the leading affiliate network in Malaysia that offers performance-based affiliate marketing solutions, has announced that the company is now moving into the third phase of business growth with new plans and intensified focus to increase retail revenue for near 9,000 AJ Affiliates and over 700 merchants, as well as to introduce AJ into overseas markets.


MyKad Smart Shopper Program (MSSP), the anchor affiliate program under AJ, is a multi-merchant retail affiliate program that uses MyKad as members’ identification, where members can get membership privileges, while AJ Affiliates who refer these members to the merchants are incentivised through the program’s system.

Under its third phase developments, Merchants can now leverage the convenient use of wireless Electronic Data Capture (EDC) terminals instead of desktop computers. These MSSP Terminals are programmed with proprietary MSSP functions to securely capture member retail transactions and facilitate redemptions.