During Q3, 666 deals worth US$ 179.6bn represented a 39% climb in value compared to Q3 2015 (828 deals, US$ 128.8bn), marking the second strongest Q3 value behind Q3 2013. Q3’s strength also shows that deals that may have been put on hold at the beginning of the year - due to uncertainties surrounding, among other factors, the outcome of the UK referendum and the continuation of both the US and European ultra-low interest rate policies - were processed over the summer. 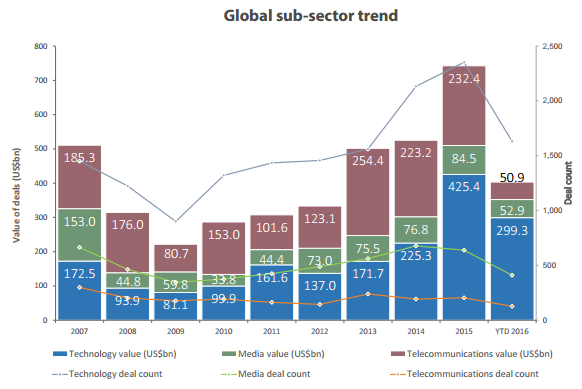 Goldman Sachs led the Financial Adviser League Table by deal value and count, having advised on 40 deals worth US$ 106bn, and maintaining 1st place year-on-year.

OutSystems, the leading low-cost platform that accelerates digital transformation through rapid application development, today announced the availability of OutSystems 10, the first low-code application development platform with advanced capabilities for enterprise mobile applications. With this, even regular developers can build the type of secure and scalable apps previously only achievable with highly skilled software engineers.

Businesses are tackling the challenges that have arisen from the relentless demand to stay competitive by bringing new mobile solutions to the market. OutSystems 10 addresses this, as well as the paucity of mobile development skills needed to build enterprise-grade, cross-platform apps.

PR - Oct 5, 2016 - Fusionex GIANT to be Incorporated into APU Syllabus

Fusionex, a multi-award-winning, leading software solutions provider specializing in Big Data Analytics (BDA) and Internet of Things (IoT), recently signed a Memorandum of Agreement (MoA) with the Asia Pacific University of Technology & Innovation (APU), to provide APU students with access to knowledge on software expertise that are crucial for the Big Data industry.

34 percent of organisations in Asia Pacific (excluding Japan) are entering a more advanced stage of data analytics as compared to only 7 percent in 2014. (Source: 2016 IDC Maturity Scape Benchmark Report).

“Through the MoA with APU, Fusionex-developed BDA platform GIANT will be incorporated into the syllabus at APU to give students real-world experience using full-fledged BDA software. Besides that, Fusionex is committed to sharing knowledge with the students, in our efforts to help increase the talent pool of data professionals in Malaysia,” adds Chen.


Professor Ron Edwards, Vice Chancellor of APU shares, “There is a great shortage of talent in the field of data analytics. To address the talent shortage, APU has developed Diploma, Degree, Masters and Doctoral programs in data analytics. This strategy is designed to create a substantial pipeline of talent for Malaysia in the years to come. We are glad to have begun this collaboration with Fusionex which will accelerate the development of quality data analytics graduates.”

The collaboration is line with the Malaysia Digital Economy Corporation’s (MDEC) aim to increase the number of Malaysian data scientist by 2000 and data professionals to 16,000 by 2020.

As light gave way to darkness, Sunway Lagoon opened its gates to those who dared walk its grounds into the uncertainty of the night. From the 7th till the 31st of October, Nights of Fright 4 (NOF4) will bring visitors face to face with their fears as local urban legends, Hollywood icons, and a modern dystopian story are brought to life!


This year, Asia’s Best Attraction boasts, “FRIGHTS, FEAR, and FUN” through only the best horror themes surrounding Asia, Modern Dystopian, and Hollywood among others as it manifests itself to present a ghastly den of eight haunted houses, six scare zones, and 11 after-dark amusement rides.

Just like some of the best trilogies, GameStart Asia is back for its third year. Acting on fan feedback from its inaugural convention in 2014 which welcomed 12,000 gamers and GameStart 2015 which saw 17,000 gamers, GameStart 2016 brings back favourites and introduces new exciting content to provide a diverse and fun-filled three days of non-stop gaming action. 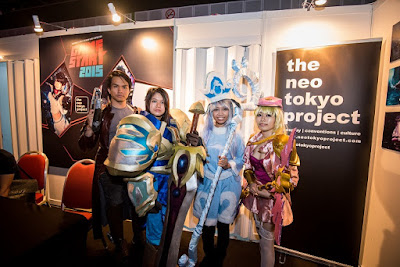 Occupying 4,000sqm of space in Suntec Convention Centre, Singapore from October 7 to 9, GameStart 2016 will bring gaming enthusiasts three days of game-related fun, including showcases and previews, international guests, cosplay, and visitor favourites like Retro DNA, harkening back the popular arcade and early-generation console games for free-play and purchase. This year, fans will see a stronger focus on eSports, or competitive gaming, with multiple tournaments happening that visitors can register for. There are also special offers on games, peripherals, hardware and merchandise from popular game franchises for those who would hate to head home empty-handed.

The joint facility will for the first time bring together Microsoft capabilities in a single location in Asia-Pacific to deliver a holistic approach to serving the security needs of both the public and private sector.

To support a comprehensive, cross-company and cross-industry approach to cybersecurity, Microsoft invests more than a billion dollars a year in security research, innovation and development. This includes a recently announced global Cyber Defense Operations Center (C-DOC), a state-of-the-art 24/7 facility that brings together security response experts from across the company to help protect, detect and respond to threats in real-time, securing Microsoft’s internal resources, cloud infrastructure, customer online services, devices and products. Microsoft has also recently established an Enterprise Cybersecurity Group (ECG) - a dedicated team of worldwide security experts who will deliver security solutions, expertise and services that empower organizations to modernize their IT platforms, securely move to the cloud and keep data safe.

Nokia has provided an advanced communications network to support railway operations and passenger services for the extended Light Rail Transit (LRT) in Kuala Lumpur, which is used by 350,000 passengers daily.

Completed in conjunction with CMC Engineering Sdn Bhd, this project highlights Nokia’s growing business with customers outside of the traditional telecommunications market, while establishing a strong record of success in the railway industry, providing mission-critical networks to more than 100 passenger and freight railway operators globally.

Brocade announced the appointment of Joe Poehls to the role of principal systems engineer for Asia Pacific Japan (APJ), responsible for driving technical leadership and excellence, including consulting and customer deployments, for Brocade® application delivery and optimization solutions across the region. Based in Tokyo, Japan, Poehls joins from Infoblox, where he was a lead solution architect responsible for network security management against Domain Name System (DNS) vulnerabilities and data exfiltration. Prior to Infoblox, Poehls spent eight years at F5 Networks, where he specialized in data center network and core application design for Financial Services Industry (FSI) customers. He also held various strategic design and consulting roles at OKI and Extreme Networks during the course of his career.

The AIMS Group (AIMS), Southeast Asia’s leading carrier-neutral data services provider, today shares that according to experts, data centres will consume three times as much energy over the next decade and this rate of increase is a worrying trend for the local data centre industry as a whole.

Despite the advancements in server storage capacity and data centre cooling technologies, the amount of energy consumed by data centres accounting for about 2 percent of total greenhouse gas emissions; or roughly the same carbon footprint as the airline industry.

The move is also aimed at further reducing operating cost by migrating from a CAPEX-heavy legacy infrastructure and systems to an OPEX based, pay-as-you-use on-demand model that will also facilitate greater real-time collaboration between MBPJ staffs through the deployment of new productivity suites and communications tools.